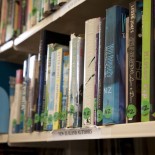 Our second workshop, held on the 19th of March, dealt with the topic of Poetry. When we asked who had written poetry before only four wavering hands went up!  But Janet and I were determined to prove that poetry is not only fun, it is a wonderful form for expression.

First things first. What exactly is poetry?  The often quoted definition of “the best words in the best order” (Samuel Taylor Coleridge) is a good start.  Janet said that “a poem is like a teabag” – the poet creates the teabag, out of a distillation of their experiences or feelings – it’s then up to the audience how long to brew it for and how long to linger over the cup.  Part of the craft of poetry (indeed of all writing) is to make something apparently simple which can hold many layers of meaning.

For the introductory exercise, I asked everyone to write one line which contained something of themselves, in relation to the word ‘orange’ (which also had to be included in the line). I then asked people to read out their lines, which I wrote on the board.  We came up with this wonderful collaborative poem:

Dropping in the water, the orange took me deep in my memories

the orange orb reflection in the paddy field encourages me

watching my grandmother next to the haft-sin

waiting for the orange going down in the bowl

I want mOrange in my life

my treasured tablecloth, these orange stains

I peel away the layers to glow as an orange

Orange, my old yellow land under the sunset.

Amazing how even in a poem written by different people without consulting with each other, there’s an apparent unity of theme – several lines seem to echo each other, and there are definite strands of ancestry, storytelling and heritage happening through this poem. Exercises like this can be taken in a group or by one person to generate material and ideas, or just to have the pleasure of playing with words – the next step might be to rearrange the lines for example, or substitute images.  Out of apparent randomness comes something coherent and meaningful.

Janet’s exercise, on writing haiku (which I’ll post in its entirety in a different post), had us writing a group of “modern haiku”.  Forms like haiku or sonnets are satisfying, succinct and can be written quickly. Written as a group on one topic or theme they can also act as ‘building blocks” for a longer poetic treatise.  An extension to this exercise might be to write separate poems on Post-it notes or index cards, and then these could be moved around in space to play with juxtaposition of image or ideas.  They are also great to swap among a group of writing friends (try a poetic correspondence!) or as a quick “brain pick-me-up” to kick off a writing session.

After a tea break, we moved on to our discussion for the afternoon – how to be a writer in the community.  This turned into a wide ranging expression which could have gone on for days!  But here are a few of the topics touched on, which are well worth thinking about:

– Truthfulness – are “all writers liars”, as Janet asserted and I agreed with?  Writers after all depend on truth and personal integrity as a basis for their writing, and for their connection with readers. But maybe, at least in fiction, it’s not necessary to stick to the factual or historical truth – it’s been said that the writer’s priority is to serve their story.  In moving away from black and white facts, it’s possible to explore the far more interesting ‘shades of grey’ around a story and to find the emotional truth.  This of course changes when dealing with genres like non fiction, autobiography or historical fiction – when a reader could reasonably expect that the writer has exercised ‘due diligence’ in checking their sources and facts.  But even then there are grey areas…. how accurate is recorded history? memory?  Isn’t  nearly everything dependent on point of view?

–Ethics – it’s important to know where you stand as a writer, and who you are/represent.  Often as writers we are drawn to difficult or controversial topics.  There may be pressure from family, community, or others to tell the story in a certain way – yet as writers we want to have the freedom to explore ‘our truth’.

– Women’s stories – reflecting on all of the points above, maybe it’s important to write just because we are women, from different backgrounds.  Writing our own stories – and those of those unable to write them (older women? others in the community?) adds to the pool of knowledge which colours our world and makes it richer.  It also counteracts a ‘history’ that arguably is weighted in favour of the privileged, the literate, the men.

Our last exercise for the day was one about “firsts”: the first day at work, at school, in a new country. Janet provided a list of writing prompts (see separate post) with which to construct a poem or simple story.  We used the final half hour of our workshop to share these stories, and some of them were fascinating!

So, in summary, Poetry is all about condensing vivid imagery and expressive language.  When writing poetry it’s a good idea to work on presenting facts before feelings – we might refer to this as object or concrete writing.  It’s effective because in reading a piece of poetry, people bring their own feelings to it, and because it’s in their head it’s all the more powerful.  Poetry is often short, so good for people with busy lives. But even in its short form, or used as building blocks to a longer work, it can be a powerful form for telling stories and making people think.

Next week – prose with Sarah Laing – see you all there!